This blog post explains the paper Hopfield Networks is All You Need and the corresponding new PyTorch Hopfield layer.

Surprisingly, the new update rule is the attention mechanism of transformer networks introduced in Attention Is All You Need. We use these new insights to analyze transformer models in the paper.

This blog post is split into three parts. First, we make the transition from traditional Hopfield Networks towards modern Hopfield Networks and their generalization to continuous states through our new energy function. Second, the properties of our new energy function and the connection to the self-attention mechanism of transformer networks is shown. Finally, we introduce and explain a new PyTorch layer (Hopfield layer), which is built on the insights of our work. We show several practical use cases, i.e. Modern Hopfield Networks and Attention for Immune Repertoire Classification, Hopfield pooling, and associations of two sets.

From classical Hopfield Networks to self-attention

Associative memories are one of the earliest artificial neural models dating back to the 1960s and 1970s. Best known are Hopfield Networks, presented by John Hopfield in 1982. As the name suggests, the main purpose of associative memory networks is to associate an input with its most similar pattern. In other words, the purpose is to store and retrieve patterns. We start with a review of classical Hopfield Networks.

The weight matrix \(\boldsymbol{W}\) stores the patterns, which can be retrieved starting with a state pattern \(\boldsymbol{\xi}\).

The basic synchronuous update rule is to repeatedly multiply the state pattern \(\boldsymbol{\xi}\) with the weight matrix \(\boldsymbol{W}\), subtract the bias and take the sign:

The asynchronous version of the update rule of Eq. \eqref{eq:restorage} minimizes the energy function \(\text{E}\):

As derived in the papers of Bruck, Goles-Chacc et al. and the original Hopfield paper, the convergence properties are dependent on the structure of the weight matrix \(\boldsymbol{W}\) and the method by which the nodes are updated:

In the following example, no bias vector is used. This means that taking the inverse image, i.e. flipping all pixels at once, results in the same energy.

We start with an illustrative example of a Hopfield Network. One input image should first be stored and then be retrieved. The input image is: 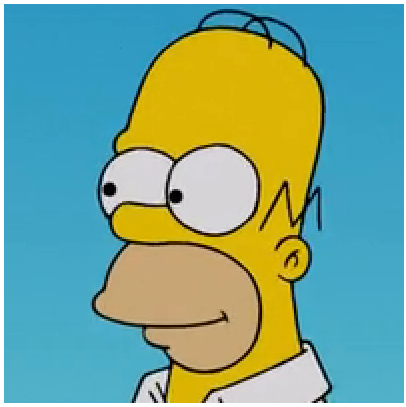 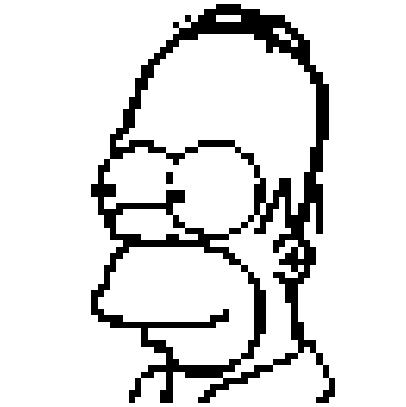 Can the original image be restored if half of the pixels are masked out? The masked image is: 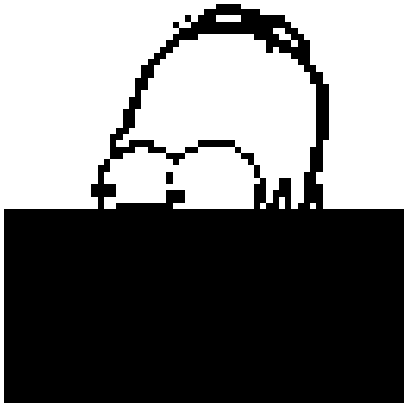 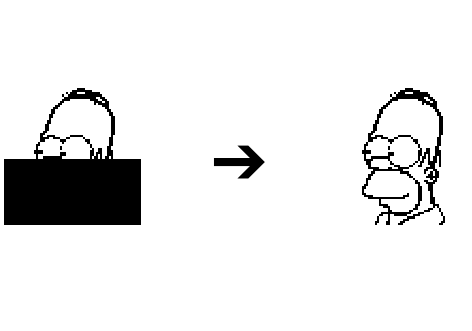 What happens if we store more than one pattern? The weight matrix is then built from the sum of outer products of three stored patterns (three input images):

Looking at the upper row of images might suggest that the retrieval process is no longer perfect. But there are two interesting facts to take into account:

where \(d\) is the dimension of the input.

The storage capacity for retrieval of patterns with a small percentage of errors is:

Consequently, we need a model which allows pulling apart close patterns, such that (strongly) correlated patterns can be distinguished.

The storage capacities stated in Eq. \eqref{eq:storage_hopfield} and in Eq. \eqref{eq:storage_hopfield2} are derived for \(w_{ii}=0\). Recently, Folli et al. analyzed the storage capacity for Hopfield Networks with \(w_{ii}\geq 0\). Also for \(w_{ii}\geq 0\), a storage capacity of \(C \cong 0.14 d\) for retrieval of patterns with a small percentage of errors was observed. The ratio \(C/d\) is often called load parameter and denoted by \(\alpha\). Folli et al. showed that there is a second regime with very large \(\alpha\), where the storage capacity is much higher, i.e. more fixed points exist. However, Rocci et al. and Gosti et al. reported that these fixed points for very large \(\alpha\) are unstable and do not have an attraction basin.

where \(F\) is an interaction function and \(N\) is again the number of stored patterns.

The storage capacity for retrieval of patterns free of errors is:

The storage capacity for retrieval of patterns with a small percentage of errors is:

where \(\alpha_a\) is a constant, which depends on an (arbitrary) threshold on the error probability.

For \(a=2\), the classical Hopfield model (Hopfield 1982) is obtained with the storage capacity

of \(C \cong 0.14d\) for retrieval of patterns with a small percentage of errors.

where \(N\) is again the number of stored patterns.

Eq. \eqref{eq:energy_demircigil} can also be written as:

The log-sum-exp function (lse) is defined as:

This energy function leads to the storage capacity:

which is (e.g. for Eq. \eqref{eq:energy_demircigil})

Using Eq. \eqref{eq:restorage_demircigil}, we again try to retrieve Homer out of the 6 stored patterns. Compared to the classical Hopfield Network, it now works smoothly, not only for 6 patterns but also for many more:

Compared to the traditional Hopfield Networks, the increased storage capacity now allows pulling apart close patterns. We are now able to distinguish (strongly) correlated patterns, and can retrieve one specific pattern out of many.

We generalize the energy function of Eq. \eqref{eq:energy_demircigil2} to continuous-valued patterns. We use the logarithm of the negative energy Eq. \eqref{eq:energy_demircigil2} and add a quadratic term. The quadratic term ensures that the norm of the state \(\boldsymbol{\xi}\) remains finite. The new energy function is defined as:

The energy function of Eq. \eqref{eq:energy_sepp} allows deriving an update rule for a state pattern \(\boldsymbol{\xi}\) by the Concave-Convex-Procedure (CCCP), which is described by Yuille and Rangarajan.

The update rule for a state pattern \(\boldsymbol{\xi}\) therefore reads:

Having applied the Concave-Convex-Procedure to obtain the update rule guarantees the monotonical decrease of the energy function.

The most important properties of our new energy function are:

Exponential storage capacity and convergence after one update are inherited from Demircigil et al. Global convergence to a local minimum means that all limit points that are generated by the iteration of Eq. \eqref{eq:update_sepp4} are stationary points (local minima or saddle points) of the energy function of Eq. \eqref{eq:energy_sepp} (almost surely no maxima are found, saddle points were never encountered in any experiment).

The new continuous energy function allows extending our example to continuous patterns. In the following, we are going to retrieve a continuous Homer out of many continuous stored patterns using Eq. \eqref{eq:update_sepp4}. First we have to convert the input images into grey scale images: 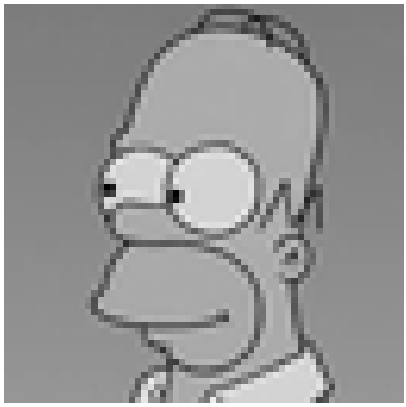 Next, we conduct the same experiment as above, but now in continuous form:

We again see that Homer is perfectly retrieved. We have considered the case where the patterns are sufficiently different from each other, and consequently the iterate converges to a fixed point which is near to one of the stored patterns. However, if some stored patterns are similar to each other, then a metastable state near the similar patterns appears. Iterates that start near this metastable state or at one of the similar patterns converge to this metastable state. The learning dynamics can be controlled by the inverse temperature \(\beta\), see Eq. \eqref{eq:update_sepp4}. High values of \(\beta\) correspond to a low temperature and mean that the attraction basins of the individual patterns remain separated and it is unlikely that metastable states appear. Low values of \(\beta\) on the other hand correspond to a high temperature and the formation of metastable states becomes more likely. We now look at the same example, but instead of \(\beta = 8\), we use \(\beta= 0.5\). The retrieved state is now a superposition of multiple stored patterns.

To make this more explicit, we have a closer look how the results are changing if we retrieve with different values of \(\beta\):

Starting with Eq. \eqref{eq:update_sepp3}, and

we arrive at the (self-)attention of transformer networks. Next, we will guide through these three steps.

Next, we simple transpose Eq. \eqref{eq:update_generalized2}, which also means that the softmax is now applied row-wise to its transposed input \(\boldsymbol{Q} \boldsymbol{K}^T\), and obtain:

which is the fundament of our new PyTorch Hopfield layer.

The insights stemming from our work on modern Hopfield Networks allowed us to introduce a new PyTorch Hopfield layer, which can be used as plug-in replacement for existing layers as well as for applications like multiple instance learning, set-based and permutation invariant learning, associative learning, and many more.

Additional functionalities of the new PyTorch Hopfield layer compared to the transformer (self-)attention layer are:

A sketch of the new Hopfield layer is provided below. 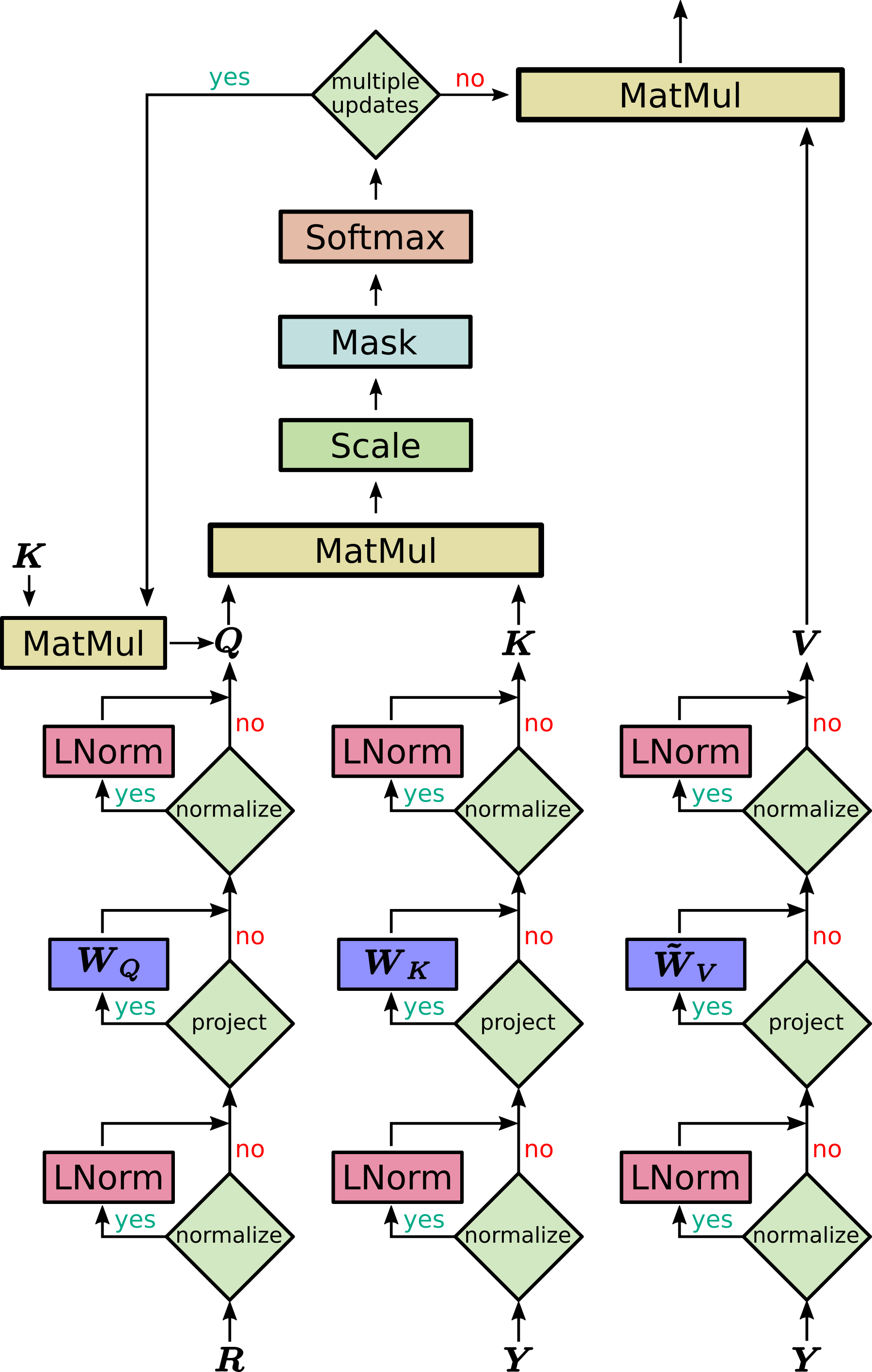 An illustration of the matrices of Eq. \eqref{eq:Hopfield_1} is shown below:

Note that in this simplified sketch \(\boldsymbol{W}_V\) already contains the output projection.

It now depends on the underlying tasks which matrices are used. For example, the code for the above sketch would be the following:

Of course we can also use the new Hopfield layer to solve the pattern retrieval task from above. For this task no trainable weights are needed.

We consider the Hopfield layer as a pooling layer if only one static state pattern (query) exists. Then, it is de facto a pooling over the sequence. The static state pattern is considered as a prototype pattern and consequently learned in the Hopfield pooling layer. Below we give two examples of a Hopfield pooling over the stored patterns \(\boldsymbol{Y}\). Note that the pooling always operates over the token dimension (i.e. the sequence length), and not the token embedding dimension.

Consequently, the classification of immune repertoires is extremely difficult, since each immune repertoire contains a large amount of sequences as instances with only a very few of them indicating the correct class by carrying a certain variable sub-sequence. This is a prominent example of a needle-in-a-haystack problem and a strong challenge for machine learning methods.

Based on modern Hopfield networks, a method called DeepRC was designed, which consists of three parts:

The following figure illustrates these 3 parts of DeepRC:

To be more precise, the three ingredients of the attention mechanism of DeepRC are:

The following sketch visualizes the Hopfield layer part of DeepRC:

It is to note that for immune repertoire classification the number of instances is much larger than the number of features (~300k instances per repertoire). To be more precise, the difference is a factor of \(10^4\) to \(10^5\). This is indicated in the sketch, where \(\textbf{Y}^T\) has more columns than rows. The complex SNN-based attention mechanism reduces this large number of instances, while keeping the complexity of the input to the output neural network low.

The pseudo-code for the Hopfield layer used in DeepRC is:

This blog post was written by Johannes Brandstetter: brandstetter[at]ml.jku.at