This blog post explains the paper Align-RUDDER: Learning from Few Demonstrations by Reward Redistribution. Align-RUDDER is RUDDER with two modifications:

Only Demonstrations Allow to Solve Complex Tasks in Reinforcement Learning

Reinforcement learning (RL) can solve simple tasks efficiently. However, if tasks become more complex, e.g. consisting of hierarchical sub-tasks, RL requires a huge amount of samples. The reason is that for more complex tasks, episodes with high rewards are difficult to find by current exploration strategies. In contrast, humans and animals learn more efficiently by obtaining high reward episodes through teachers, role models, or prototypes. We believe that in RL this approach can be followed by learning from demonstrations. In this context, we assume that episodes with high rewards are given as demonstrations and we are able to efficiently learn from as few as two episodes.

Therefore, we believe that demonstrations are essential when bringing RL to the real world where the relevant tasks are typically highly complex.

Delayed rewards are often episodic or sparse and common in real-world problems. For real-world problems, reward for single actions is often not available, however, episodic rewards are easy as it can be given for achieving a goal or for completing a task. Examples of episodic rewards are board games like chess or Go. Delayed rewards require a long-term credit assignment, which is still a great challenge in reinforcement learning. RUDDER excels in long-term credit assignment for delayed rewards applying the concepts of reward redistribution and return decomposition (for more information see RUDDER blog).

The main idea of RUDDER is to exploit the fact that the value function is a step function. Complex tasks are hierarchical and are composed of sub-tasks or sub-goals. Completing sub-tasks is reflected by a step in the value function. In this sense, steps indicate events like achievements, failures, and/or changes of environment/information. In general, a step in the value function is a change in return expectation (higher/lower amount of return or higher/lower probability to receive return). The reward can then be redistributed to these steps. In particular, identifying large steps is important since they speed up learning tremendously and results in:

Assume we have episodes with high rewards and average rewards. Supervised learning identifies state-action pairs that are indicative for such high rewards. We therefore want to adjust the policy in a way that these state-action pairs are reached more often. The reward redistribution implemented by RUDDER achieves these state-action pair adjustments by using an LSTM to predict the final return at every timestep. Since the hidden state of the LSTM is able to store the history of events, we can focus on key events by computing the difference of predictions, which ultimately establish the contributions to the final return.

To estimate the final return the LSTM uses return decomposition, which relies on pattern recognition. On the left side of the figure shown below, we illustrate a simple environment where an agent needs to collect a key to unlock a door and receive the treasure.

Such a step-function pattern could be detected by a feed-forward neural network (FNN) as shown in the middle section on the left side. The issue is that with a FNN the context information of having a key must be re-extracted in every state and training becomes much more difficult. In contrast, RUDDER uses an LSTM, which is able to store the information of having a key in its hidden state, such that it needs to extract this information only once in the state where the distinct event occurred. Afterwards this context information is only updated when the lock is opened as shown on the bottom left side.

In the right section in the figure above we illustrate how the reward is redistributed according to the step-function. An inherent property of RUDDER is, that by identifying key events and redistributing the reward to them it also pushes the expected future reward towards zero. This considerably reduces the variance of the remaining return and, hence the estimations become more efficient. Zeroing the expected future reward and redistributing the reward is mathematically endorsed by introducing the concepts of return-equivalent decision processes, reward redistribution, return decomposition and optimal reward redistribution. One important contribution established by RUDDER was the introduction of the theoretically founded sequence-Markov decision processes (SDPs), which extend beyond the scope of Markov decision processes (MDPs). The definition of SDPs was thoroughly explained in the appendix of the RUDDER paper including proofs that show that the optimal policy remains unchanged.

For more about reward redistribution theory and its realization in RUDDER using LSTMs, see RUDDER blog.

So now it’s time for Align-RUDDER, which is RUDDER with two major modifications:

Of course, Align-RUDDER also works with many demonstrations. Align-RUDDER inherits the concept of reward redistribution, which considerably reduces the delay of rewards, thus speeding up or enabling learning.

In bioinformatics, sequence alignment identifies similarities between biological sequences of different species to determine their evolutionary relationship and conserved regions in different sequences. The underlying problem of this setting is much the same as identifying similarities between demonstrations from different players to determine their underlying strategy. As you can see, these two settings align nicely:

The alignment techniques in Align-RUDDER identify shared events that represent the underlying strategy. Reward is then redistributed to these shared events (for events see below). The more players share the same event the more reward is redistributed to this event. If an event is shared among all players this indicates achieving a sub-goal or completing a sub-task. The episodes from different players are what we call demonstrations.

Consider one of the toy tasks from the paper. In this task, the environment is a simple grid world with four rooms. The agent starts in the center of the bottom left room and has to reach the goal in the bottom right room. At every location, the agent can move up, down, left and right (if there is no wall in the way). In the first room there is a portal at a random position that teleports the agent into the second room. The portal is introduced to avoid that BC initialization alone solves the task. It enforces that going to the portal entry cells is learned, when they are at positions not observed in demonstrations. From the second room onwards the agent has to traverse the remaining rooms by going through the doors connecting them. Reward is only given at the end of the episode. The figure below shows an exemplary demonstration where the agent has reached the goal. 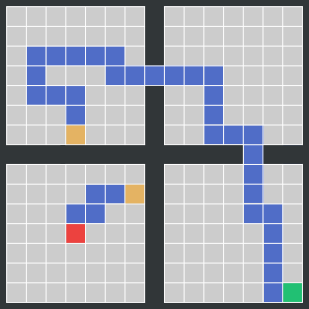 The reward redistribution of Align-RUDDER consists of the following five steps:

Align-RUDDER is compared to Behavioral Cloning with \(Q\)-learning (BC+\(Q\)) and Deep \(Q\)-learning from Demonstrations (DQfD). GAIL, which has been designed for control in continuous observation spaces, failed to solve the two artificial tasks, as reported previously for similar tasks in SQIL. In addition to the above setting with four rooms we also performed experiments with eight rooms. Other than the number of rooms both tasks are the same. An episode ends after 200 time steps or when the agent reaches the goal. To enforce that the agent reaches the goal with the fewest steps possible, we reduce the final reward for every time step the agent needed to get to the goal. 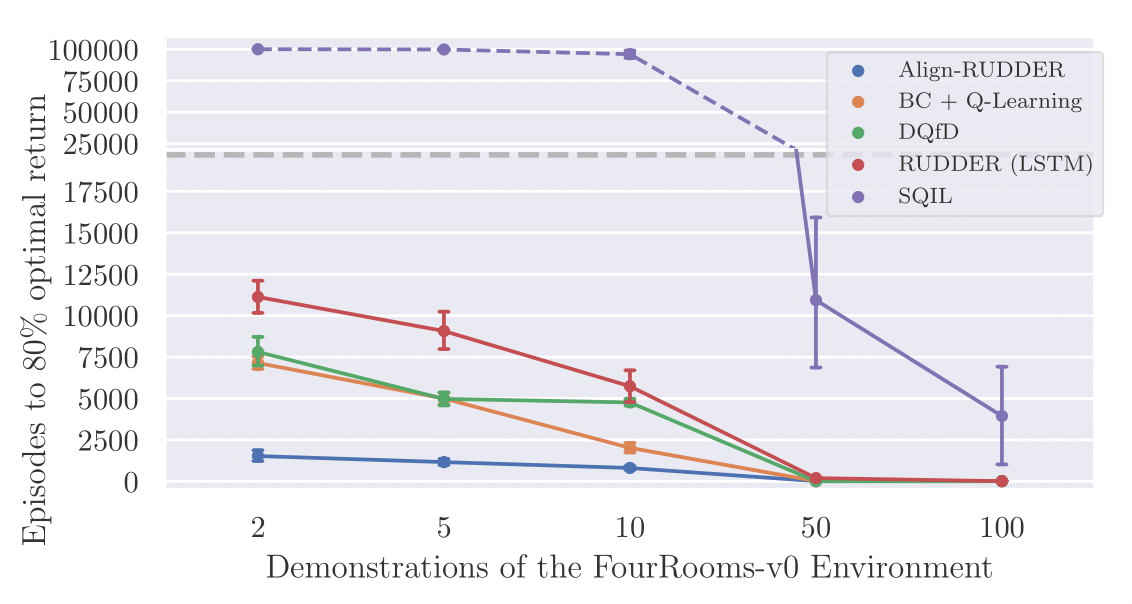 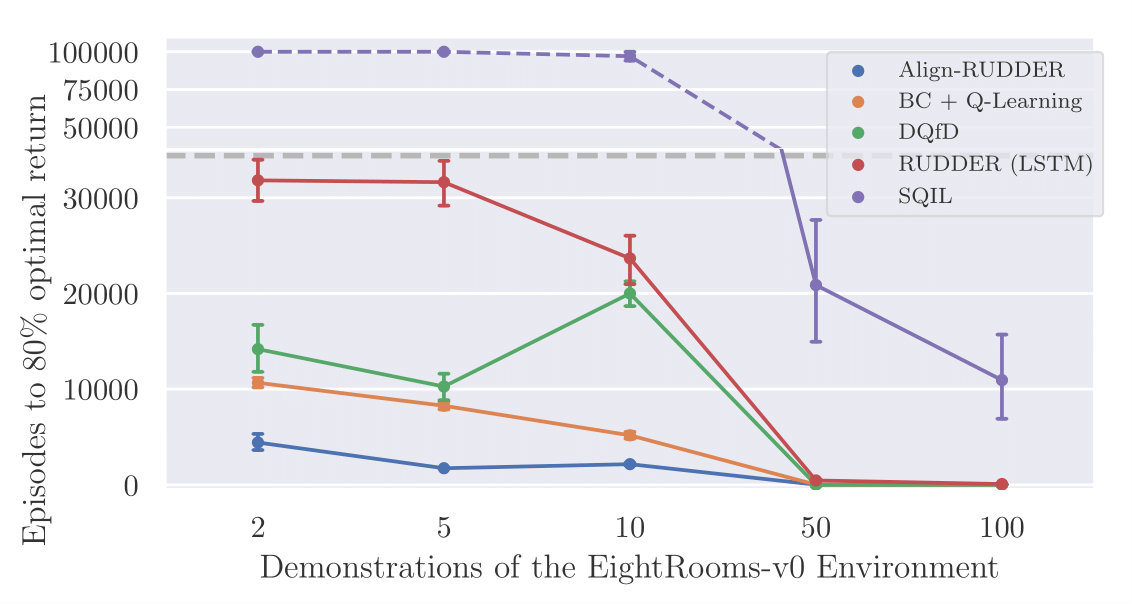 Align-RUDDER significantly outperforms all other methods, in particular with few demonstrations.

We tested Align-RUDDER on the very challenging MineRL NeurIPS Competition task (ObtainDiamond) where a reinforcement learning agent has to navigate through the complex 3D, first-person, Minecraft environment to collect a diamond. Episodes end due to the agent dying, successfully obtaining a diamond, or reaching the maximum step count of 18,000 frames (15 minutes). An agent needs to solve several sub-tasks to reach its goal. The observation space of an agent consists of visual input and player inventory and attributes. The action space consists of the Cartesian product of continuous view adjustment (turning and pitching), binary movement commands (left/right, forward/backward), and discrete actions for placing blocks, crafting items, smelting items, and mining/hitting enemies. The primary goal of the competition is to foster the development of algorithms which can efficiently leverage human demonstrations to drastically reduce the number of samples needed to solve complex, hierarchical, and sparse environments [Guss et al.]. Participants need to obtain a diamond within 8,000,000 samples in less than four days using hardware no more powerful than a NG6v2 instance (AIcrowd MineRL Competition). This challenge was first introduced in 2019 and none of the participants was able to collect a diamond (BBC News report). Since Reinforcement learning algorithms struggle with learning tasks that have sparse and delayed rewards, participants struggled to find a solution although they relied on state-of-the-art methods, i.e. Deep Q-learning from Demonstrations (DQfD) [Hester et al.].

We didn’t use the intermediate rewards given by achieving sub-goals from the challenge, since our method is supposed to discover such sub-goals via redistributing reward to them. We only give reward for collecting the diamond.

With Align-RUDDER we tackled the ObtainDiamond task and managed to collect a diamond in 0.1% of the time over multiple runs and seeds with similar constrains as proposed by the challenge organizers. To put this in context, if one splits the ObtainDiamond task into 31 sub-tasks and assign a 50% success rate to each task, the resulting success probability to collect a diamond is approximately \(4.66 \times 10^{-10}\). This is an one in two billion chance of success. In comparison, our method performs two million times better.

The 31 sub-tasks include collecting log, crafting planks or smelting iron ingots and were extracted from the provided human demonstrations, not hard-coded. The sub-tasks emerged by aligning the players inventory items and are extracted from the resulting profile model. In the case of Minecraft the profile model already determines a sequence of achievable sub-goals and consiquently reward can be redistributed uniformly. For each unique sub-task we then train an agent and select between the corresponding agents according to the profile model. In the following figure we illustrate an overview of a profile model based on human demonstrations using the player inventory. 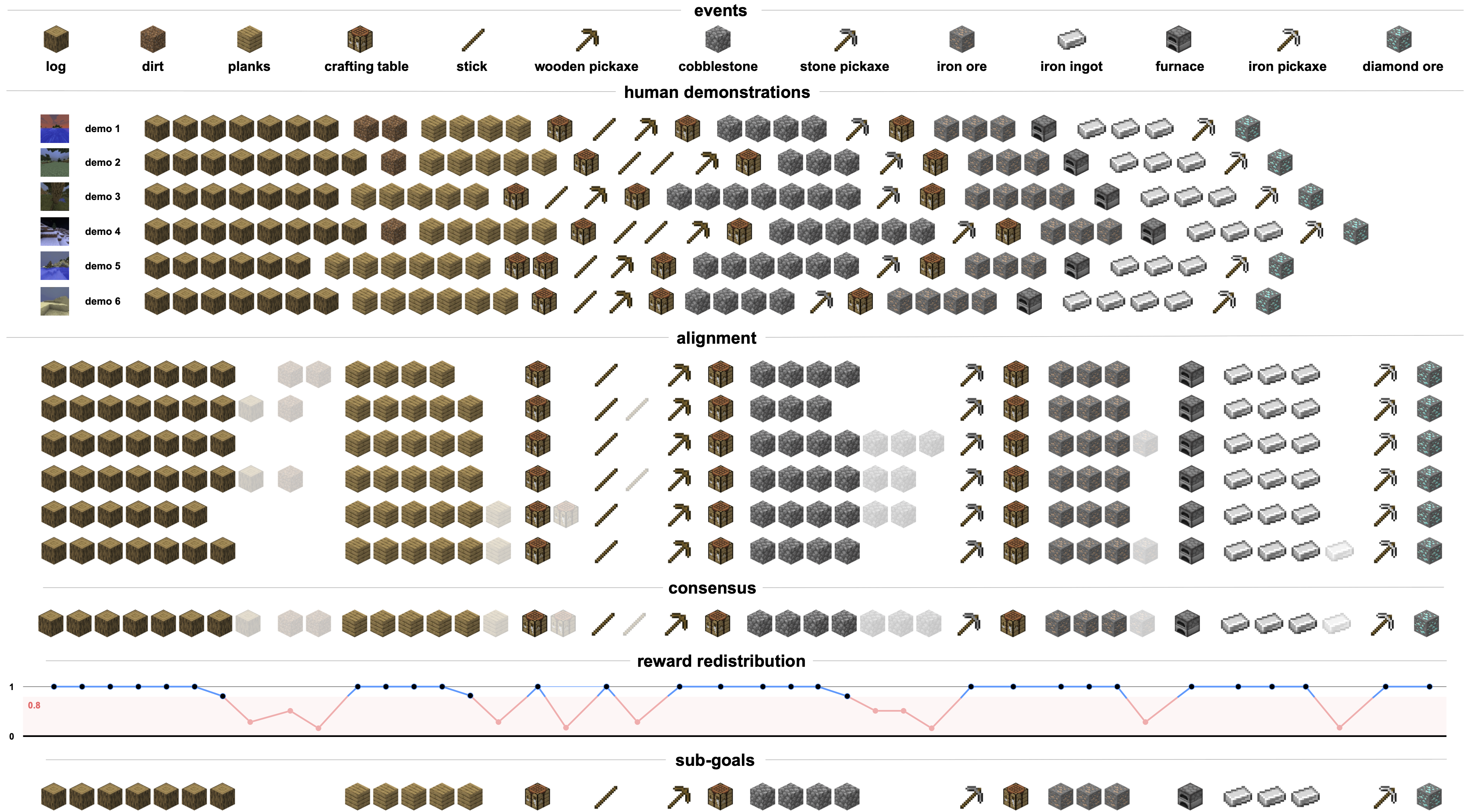 In the following video we summarize the main aspects of tackling the ObtainDiamond task by Align-RUDDER.